Information From Wikipedia, the free encyclopedia

Cinnaminson Township is a Township in Burlington County, New Jersey, United States. Cinnaminson Township borders the Delaware River, and is an eastern suburb of Philadelphia. As of the 2010 United States Census, the township population was 15,569.[4] Cinnaminson was incorporated as a township by an act of the New Jersey Legislature on March 15, 1860, from portions of Chester Township (now known as Maple Shade Township and having no connection to theMorris County community that still bears that name). Portions of the township were taken to form Delran Township (February 12, 1880), Riverton (December 18, 1893) and Palmyra (April 19, 1894).[8] 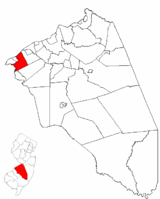 Cinnaminson was formed by resolution in 1860 from a section of Chester Township. Part of this resolution reads, “The inhabitants of the township of Chester having become so numerous that it is impracticable for them to meet with convenience and good order in one assembly… the Township shall be divided.” The name “Cinnaminson” derives from the Lenape Native American word “Senamensing,” which means “sweet water”.[23]

The Cinnaminson station on the River Line light rail system, is located on Broad Street, offering southbound service to Camden, New Jersey and the Walter Rand Transportation Center (with transfers available to the PATCO Speedline) and northbound service to the Trenton Rail Station with connections to New Jersey Transit trains to New York City, SEPTA trains to Philadelphia, Pennsylvania, and Amtrak trains.

New Jersey Transit provides bus service to Philadelphia on the 409 and 419 routes.[24]

Since 1900, Cinnaminson has been home to the Riverton Country Club, a country club and golf course designed by Donald Ross.[25]

Cinnaminson is home to the Burlington County Footlighters, a production company founded in 1938 who perform regularly at a playhouse within the township.[26] Additionally, Cinnaminson facilitates an all-ages regional chorus and wind ensemble.

Notable current and former residents of Cinnaminson Township include: