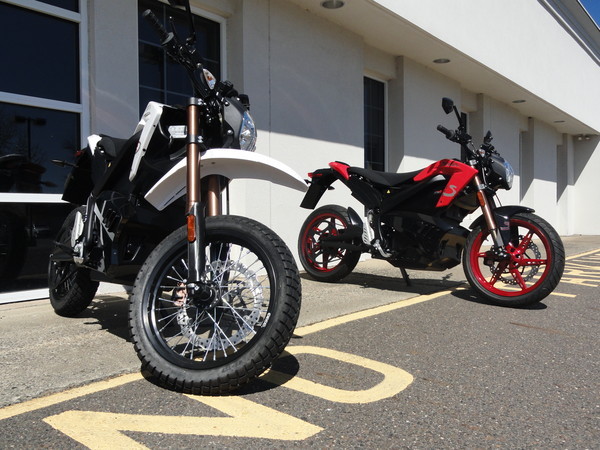 Owning a motorcycle is about a lot more than having a vehicle that gets you from Point A to Point B.

Bikers want their motorcycle to say, “This is me,” said Alan Fisher, manager of the motorcycle shop at Eckenhoff Automotive in Cherry Hill. “Motorcycles become a person’s personality.”

But what if your personality is more of the quiet, reserved, concerned-about-the-environment-type? Is there a motorcycle for me, you might be wondering?

Zero Motorcycles, based out of Santa Cruz, CA, may not have produced the first fully electric motorcycle, but to hear owner Ted Eckenhoff tell it, they’ve perfected it.

“This is a great product for today. It’s quiet, it has no engine, no engine oil, no carburetor, no gasoline, no transmission, no transmission, no chain, no clutch … You could drive it in the house; there’s no pollution,” said Eckenhoff, who ran the dealership on Main Street Moorestown in the ‘80s and ‘90s (where CVS now sits) before moving it to its current location in 1999.

Rather than debating the practicalities of driving a motorcycle in the house—as cool as that sounds—let’s get back to how quiet the bike is.

If you’ve ridden in or been near a golf cart, you know what the Zero sounds like. It may be even quieter. Fisher demonstrates, slipping the key in the ignition, holding for a moment to indicate “This is what ‘off’ sounds like,” then turning the bike to “on.”

The difference is virtually undetectable. Only when Fisher revs the throttle slightly does the bike emit a slight whir. That’s it.

The Zero is fashioned somewhat off the electric scooter, but with the attitude—and speed—of a motorcycle. Eckenhoff said the bike has a top speed of 88 mph and handles very smoothly, yet is designed very simply.

Zero, which was founded by a former NASA engineer, is targeting a broad base of customers, including the environmentally conscious, the novice motorcyclist and the urban dweller looking for a cheap mode of transportation, but one with a little punch.

The Zero plugs into a standard 110 outlet—the same one you plug your TV, coffee maker or iPhone into—and in about eight hours is fully charged for about 114 miles, on average. Eckenhoff said it’ll cost you “about a dollar a day” for a full charge. Zero’s website puts the price at approximately 1 cent per mile.

Standard service on a bike that runs on gasoline can run between $300-400 per visit, Fisher said. With the Zero, there’s virtually no service needed for the lifetime of the bike (about 300,000 miles).

And then there’s the feel-good aspect of riding a vehicle with a negligible carbon footprint, which was particularly appealing to Eckenhoff, who was born and raised on a farm and knows all about the meaning of the word “green.”