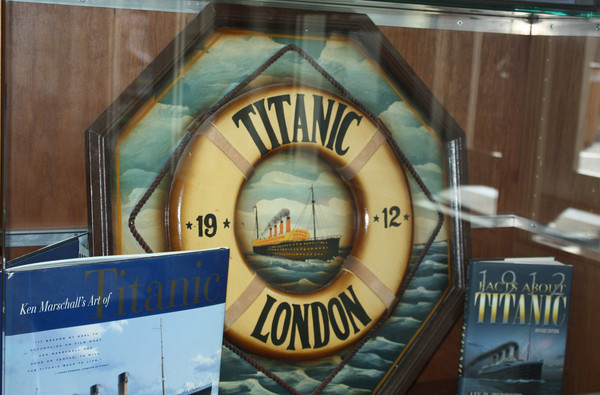 As a child, Joe Robinette remembers reaching into his father’s bookcase and pulling out a volume on Titanic. Even then, the sinking disaster fascinated him.

Robinette, a professor emeritus at Rowan University, maintained an interest in Titanic throughout his life, but really rekindled his curiosity in recent years as he purchased a trove of Titanic artifacts and memorabilia.

Robinette’s collection is part of Rowan University’s slate of events this week to mark the 100th anniversary of the sinking that sent 1,500 people to their graves in the Atlantic Ocean.

The artifacts exhibit opened at the university’s Campbell Library on March 26 and will remain open through May 11.

But the focus this week is on the upcoming century-mark of the sinking on April 15. Ahead of that day, Rowan will offer students and the public several opportunities to learn more about Titanic.

It starts on Tuesday, April 10 with a presentation by Robinette, Rowan history alumna Lori Yeager and Jennifer Myerson. They’ll talk about the sinking and the Titanic’s legacy.

Robinette knows most students’ Titanic knowledge comes from James Cameron’s blockbuster movie. And while he’s a fan—although A Night to Remember is his favorite Titanic movie—the retired professor wants to offer a wider view.

“It’s a major part of European and American history. The fact that so many well-heeled, well-known people were on that ship and went down with it adds to the allure and mystery,” Robinette said. “People just stood on that deck, knowing they were going to die. There’s a certain fascination with that.”

Robinette readily admits he’s not a historian or Titanic expert. Rather, he has a larger interest as a collector. Some of his collector travels have taken him to Titanic-themed sales, where he purchased coal pieces that were aboard the ship, for example, and got the autograph of Millvina Dean, who was both the youngest survivor and the last survivor to die.

He also has memorabilia, such as a signed poster from the Titanic movie.

The Tuesday presentation is followed by two screenings later in the week: the National Geographic documentary Titanic: How It Really Sank and the feature film A Night to Remember.

And, of course, if you want to relive Leonardo DiCaprio and Kate Winslet’s tragic love story, Titanic is in theaters now, in 3-D.