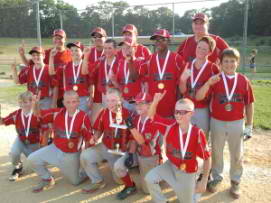 For the previous weekend, it was definitely the time of Cinnaminson Pirates U11 Baseball team because they have won the battle on the Sand Lot Baseball Tournament that was held in Sicklerville.

In the tournament last weekend, the Cinnaminson Pirates went on a 4-0.

Last July 1, 2012, the said team played with team of Mt. Laurel and Pirate Craig Horsley pitched five scores in which outstanding five and only letting and permitting one walk. Most importantly, the result of their battle was a total win for them, 4-0. The son of Mr. Farrell, Adam Farrell who is the pitcher of the team sealed the round six of the game by earning the save and striking out two.

On the second game at the same day, July 1, the championship game was held counter to the team of Cherry Hill. The Cherry Hill won the game in the morning that is why they advanced and they got a chance to fight with the Cinnaminson Pirates. The innings were kept count in almost all rounds, in spite of the exceptional head-over-heels performance and the exerted effort from both teams.

In the ending, the Cinnaminson Pirates advanced to the district tournament at 5:30 in the afternoon, Friday in Mt. Laurel then on Sunday, they will play again and if their destiny and fate permit that they will be successful either or both, they will play at the next week’s schedule in the tournament for double elimination.