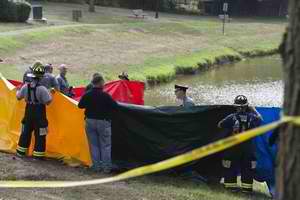 The police dive team of the state already removed the body that was found earlier in the morning by a citizen on the pond at the Maple Shade Park.

The Maple Shade officers as well as the state police decided to put large tarps to cover the dead body as the dive team pulled it up from the pond.

The citizen who saw the dead body was just a passerby. The passerby by hurriedly called the police to respond.

When the residents near the area found out that there was a dead body in the pond, they went around the zone because of their concern and most of all their curiosity.

According to Sarah Tomafsky, a longtime resident, every single individual there wanted to know if who owns the dead body because maybe it was someone they know since the town is small.

On the other hand, the state police have not released any information yet about the identity of the dead body.