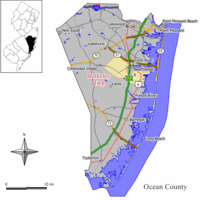 According to the prosecutors, there is a man who just died because of a fast-moving blaze which damaged a house in a retirement community in a southern New Jersey.

Up until now, the cause of the fire at the Holiday City development in Berkeley Township is still unknown and remains to be investigated by the authorities.

The Ocean County’s executive assistant prosecutor stated that the blaze began at about 4:00 in the morning last Saturday. The victim’s identity was not revealed but it was said that he lived alone in the house.

Aside from the reported death, no other damages were known.