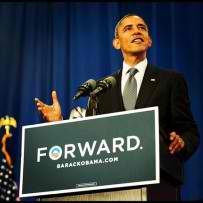 The state have voted for the Democratic candidate last 2008 presidential election.

On the other hand, both candidates did not campaign in New Jersey in an aggressive manner.