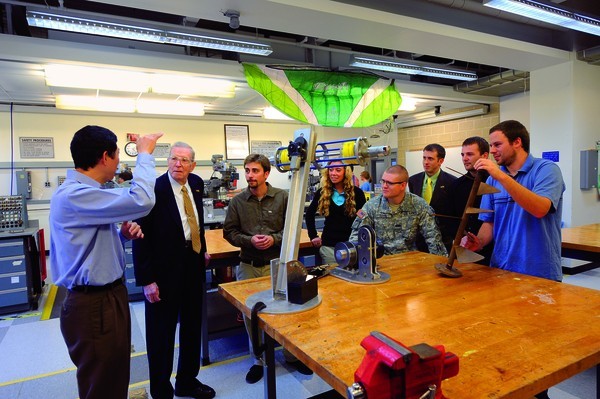 On June 17, Rowan University marks the 20th anniversary of the transformational $100 million gift that Burlington County businessman and philanthropist Henry Rowan and his late wife, Betty, pledged in 1992 to then-Glassboro State College (GSC).

For 20 years, the institution now known as Rowan University has been marking milestones, projects and collaborations barely dreamed of, let alone hoped for, two decades ago.

When he made the then-unprecedented donation to a public school, Henry Rowan had just one stipulation. The founder, president and CEO of Inductotherm Industries, Inc. and an alumnus of the Massachusetts Institute of Technology, Henry Rowan asked that GSC build an engineering college in South Jersey and revitalize engineering education.

Rowan University did that with remarkable success, graduating its first engineering class in 2000. The College of Engineering offers its hallmark engineering clinics, providing students with hands-on experiences starting in their freshman year. That approach was unusual at the time the College was founded—programs typically started hands-on work two years later—but it is widely emulated now. Today U.S. News & World Report consistently places the College among the top 25 undergraduate engineering programs in the country (bachelor’s/master’s category), and several of its programs have ranked in the top 10 in their field; Chemical Engineering, for instance, has been ranked in second or third place nationally for multiple years. Professors frequently lead national and international organizations, committees and subcommittees in their areas of specialty. Students regularly work on projects for NASA, the U.S. Navy, state offices and Fortune 500 companies, among hundreds of organizations.

The Rowan gift did much more for the institution, however, than create a College of Engineering. It paved the way for broader initiatives, spurred other individuals and companies to donate to the school and continually attracted more and more competitive students into programs in more than a half-dozen colleges that comprise the University.

At the time it was made, the Rowan gift was the largest donation ever given to a public school.

“Mr. and Mrs. Rowan’s gift was unheard of at the time and caused quite a stir in academic and philanthropic circles,” said Rowan President Dr. Ali A. Houshmand, who came to the University as provost more than a decade after the gift was made. “To say we were—and are—simply grateful would be an understatement and do a disservice to the Rowan family’s generosity. Their pledge to this school has transformed it. Yes, it enabled us to start an engineering school. And that school enabled more collaborations, greater funding and indeed I believe led us to co-founding Cooper Medical School of Rowan University, among many other initiatives in the last two decades.”

Highlights at the University since 1992 include:

• Rowan has enhanced and expanded numerous programs, including the honors program endowed by Thomas N. Bantivoglio.

• Rowan has partnered with the Borough of Glassboro and SORA Holdings on the $300 million, mixed-use Rowan Boulevard project.

• Rowan will open Cooper Medical School of Rowan University (CMSRU) in collaboration with Cooper Health System this summer. CMSRU is the first new four-year medical school in New Jersey in three decades and the first ever in South Jersey.

• The University will open a School of Biomedical Sciences this summer.

• The William G. Rohrer Charitable Foundation (more than $12 million for the College of Business, including scholarships and the University’s first endowed chair)

• Keith and Shirley Campbell ($1.5 million for the library)

• Lawrence and Rita Salva ($1.18 million in scholarship support for the medical school and the College of Communication)

• The Charles & Lucille King Family Foundation, Inc. ($1 million to the College of Communication for an endowed chair)

• The Rowan Family Foundation (additional funds to support special programs in engineering, scholarships and the fine and performing arts)

Virginia Smith, daughter of Henry and Betty Rowan, Group vice president of Inductotherm Group and a member of the Rowan University Board of Trustees, said recently, “My father is not only pleased with the investment he and his family have made in this school but has also found it rewarding to see the profound difference this gift has made throughout the entire institution. The University has undergone an amazing transformation over the last 20 years, providing an extraordinary impact on students, faculty and staff, indeed, on the entire region of Glassboro and southern New Jersey.”

Rowan University will mark the 20th anniversary of the Rowan gift in the fall with a formal ceremony. A special website created by the university includes the story behind the gift, photos and videos.