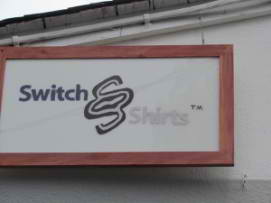 It is definitely a great news especially to the owners of the two-toned hoodie business as their market is growing a lot better in the commerce industry. Just last Friday, they expanded the said business and accompanied by a very impressive launching of their new store called Switch Shirts. The owners are the following: Tyler Woyshner, Chaz Briggs, and Mike Rudolph.

In the past, just about two years ago to be exact, the 19 year old guy named Woyshner, who is also studying architectural engineering at the Drexel University as a junior, attended the event at Susquehanna Bank Center in Camden for him to witness Dave Matthews Band. He was wearing a blue hoodie that time and as the concert was going well, he decided to buy a gray colored

Well ahead, while Rudolph was browsing Facebook over the web he suddenly saw the image that was posted by Woyshner that had been captured while he was at the concert.

When he saw the photo, he asked Woyshner if he was wearing a double-colored sweatshirt during the concert.

He was not wearing the shirt that Rudolph described but an idea came to their minds.

Rudolph and Woyshner decided to buy a couple of sweatshirts with different colors and after buying those, they cut the clothes and sewed the two sweatshirts that does not have the same color and put them together.

After sewing and polishing the clothes, they wore it and they walked around the town and their self-customized sweatshirts appear to be the cynosure and gained everyone’s attention.

Due to the attention that their own sweatshirts had, the clever guys purchased 200 more hoodies and worked on it to produce a desirable output again.

That event in their lives was in the year 2010, November and after that, their “Switch Shirts” company was born.

Their 21-year-old friend named Briggs joined them in their business venture in January 2011. Briggs helped and backed up the graphics on their company web site and he also created the Facebook fan page of their company. Briggs is a senior student who is studying business administration at Rutgers University in Camden.

The intelligent guys are very hands-on in their business. They already have four sewing machines and all of them are participating in the advertising, management of customer orders, accounting and most of all, stitching.

The three geniuses had a logo for the company and the company logo was designed by the brother of Rudolph and the name of their business came from the bright idea of Ben Smith, their friend.

Originally, the sweatshirts are shipped from China but they have changed the manufacturer that is located in Pennsylvania. Many people are an avid fan of their products especially those sweatshirts that represents the two colors of some professional sport teams.

Up to the present time, they have already vended more than 2,000 zip-up sweatshirts, which are very unique in style.

They began to sell two-toned shirts that are short-sleeved just six months ago and these new shirts were expected to have a great effect to the market especially now that the warm weather just approached.

The store is intended to be open to offer their products to the market for the succeeding tree months and if the business will hit good, then it will be the time for them to continue their plan in hiring employees to take over since they will all return to pursue their career as a college student. For those people who do not have the time to go to and check out their store, their website switchshirts.net is also accessible.

According to Woyshner, everything was an idea but then, it worked and gave them a success.