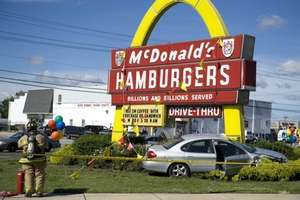 The White Horse Pike, which is neighboring Warwick Road in Lawnside, was reopened at about 1:00 in the afternoon when the police authorities inspected a violent vehicle crash where it involves a motorcycle at about 10:00 in the morning.

The initial reports stated that the motorcyclist was seriously hurt around 10:00 in the morning in a vehicle crash that involves a silver Ford Taurus.

According to the witness of the incident, the silver Taurus hit the cyclist.

While the officers are investigating the site where the crash took place, the motorcycle could be seen  beside the highway intersection and the boots of the driver as well as the riding gear were placed on the road surface nearby.

Since the silver Taurus has run off the road, it hit the indication of McDonald’s in conjunction with the highway intersection.

The cyclist that was injured was brought to Cooper University Hospital.