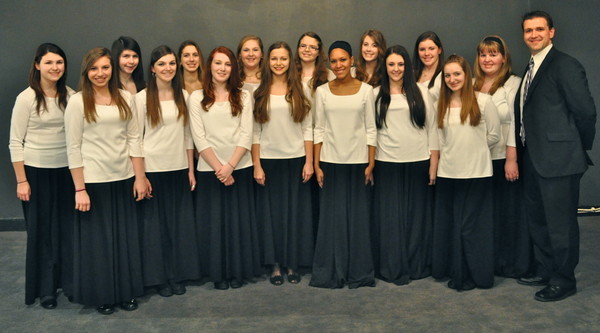 Everyone knows the joke about how you get to Carnegie Hall.

But not counting a seat in the crowd, very, very few actually make it there.

So when 15 girls from the Holy Cross High School Women’s Ensemble had the chance to take the stage at the venerable concert hall, it was a once-in-a-lifetime experience.

“It’s like the Super Bowl of concert halls,” said choir director Ray Bonnette. “To go and sing at Carnegie Hall is one of the biggest deals in music.”

Bonnette’s girls earned the chance to perform at Carnegie—alongside several other high school choirs from California, Florida, Utah and Wisconsin, to name a few—after a winning performance at the WorldStrides Heritage festival in Philadelphia last year, which is all the more impressive when you consider the choir was only just founded about a year and a half ago.

As a reward for their performance, the girls were invited to sing with the National Youth Choir at Carnegie Hall on March 4. They spent four days in the city, enjoying the full New York experience, during which they practiced with world-renowned conductor Anton Armstrong.

“For them to go up there and to study under him, it was priceless,” said Bonnette.

The full choir performed several selections, including Mozart’s “Kyrie Eleison,” “Lamb of God” by German Chorale (arranged by F. Melius Christiansen), “Zion’s Walls” by Aaron Copland (arranged by Glenn Koponen), “The Cloths of Heaven” by M.E. Valverde, and the Swedish carol “Domaredansen (The Judge’s Dance)” (arranged by Drew Collins), among others.

The choir earned a standing ovation from spectators who filled the concert hall, according to a release from the high school.

Jessica Molz, of Moorestown, and Emily Ehrhardt, a former student at Our Lady of Good Counsel, are members of the ensemble.

Jessica’s mother, Michelle Molz, said the experience was “phenomenal” for her daughter’s “artistic and cultural development.”

“She received top-notch voice instruction from Dr. Anton Armstrong, but he also emphasized courtesy and acceptance of others during rehearsals, little mini-lessons in humanity. He was fabulous and charismatic,” she said. “I am so proud of her and the other girls in the ensemble for representing Holy Cross with dignity and respect.”

Bonnette said he doesn’t know whether the girls have a full appreciation of the experience now, but later in life, they will. For some, it’s the perfect college essay opportunity.

“I feel very blessed and honored to have shared in this experience with our young ladies,” he said. “It is definitely one of the most positive experiences I have been a part of throughout my entire music career.”