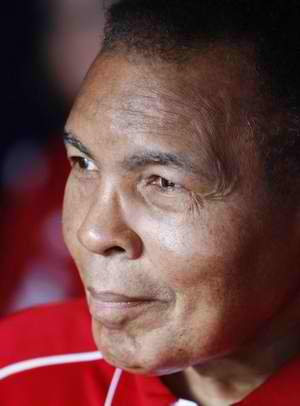 Muhammad Ali is also known as the boxing great because he is the heavyweight champion for three times and also for his shameless confidence when he is inside or outside of the boxing ring. He is also one of the famous people that are known for their honesty and frankness when it comes to the humanitarian and social foundations.

Muhammad Ali is the receiver of the 2012 Liberty Medal. The said medal will be given to him at the National Constitution Center on Independence Mall at a ceremony in September 13, 2012. When it was announced, he was not present to hear the announcement itself.

According to Bill Clinton, the chairman of the National Constitution Center and the former President, Muhammad Ali who is 70 years old already represents the spirit of the Liberty Medal by the means of accepting the self-governance, freedom, equality and empowerment, which are considered as the essences of the Constitution. He also added that Ali is helping to reach all the people on the all corners of the world.

The sponsors and partners of the Liberty Medal stated that Ali really represents the qualities needed to meet the criteria of the award. Ali has what it takes. His lifelong bravery and principle are just some of the factors why he was chosen as the recipient of the Liberty Medal. Also, the award was affected because of his opinionated promotion for the freedom of religious and civil to his charity, social engagement and philanthropic exerts.

The President and CEO of the National Constitution Center, David Eisner, said that Muhammad Ali signifies all the factors why America looks great. Ali helped in getting the people to be productive so that the nation will be a better place for everyone.

Muhammad Ali serves as the inspiration for many people that is why it is really suitable that he is the recipient of the Liberty Medal.