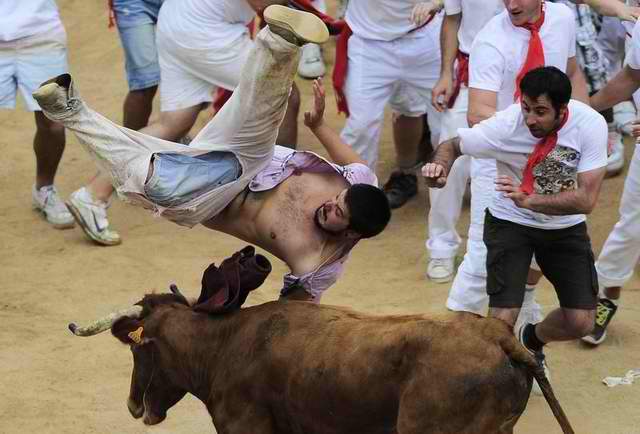 In Pamplona, Spain, an annual run on the San Fermin festival was held and a lot of people decided to watch and participate for the event but according to the officials, the event did not really went well because bulls gore two Britons and one man from Cherry Hill last Monday.

The Cherry Hill man was identified as a 38 years of age named Aryeh Deutsch. He was one of the hundreds and thousands of people who participated in the annual run. According to him, he tripped and fell in the middle of the troop of the bull runners and then he just knew that he was in trouble because a black bull was going on his direction and obviously, the bull wanted to gore the man from Cherry Hill.

The man that came from Cherry Hill was an engineer and he also stated that all that he can remember from the goring incident was when he noticed that he was already under the body of the bull as he can see the belly of the bull. The bull caused him to get wounded on his right calf.

During the first few moments after he got hit, he did not notice that he was already got gored in his right calf.

As the incident happened, the runners decided to huddle on the ground in order for them to be safe from harm that the bull can cause and that was the chance of the bull to hit the two Britons and after the moments that were full of intense, the bull was discouraged to hit more the gored people through the means of the stick-wielding cowherds.

The two Britons were identified through their age. The first Briton was already 29 years old while the other one is only 20 years old.