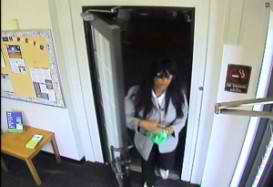 The black woman who was accused of robbing the bank was finally arrested by the police authorities.

The said woman was the suspect for robbing the bank last Tuesday around 10 in the morning. The bank was on Route 130 and it is the Susquehanna Bank.

She was arrested last Friday and she was identified with the name of Aquamena Hawthorne. She is already 36 years of age and she is from Willingboro.

Thanks to the license plate reader technology because it is one of the medium that helped the police authorities to hunt her and arrest her. She was caught at Camden.

The police authorities found out that it was not the only bank that she robbed but there are a lot more on the list. Her way of doing robbing is through going to the bank teller where she will demand certain amount of money and she will declare that she have a gun but up until this time, she have not shown any gun.

She is currently staying at Camden County Jail and she was sentenced for theft, conspiracy and robbery.