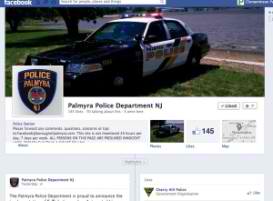 Since Facebook is one of the most famous social networking web site on all corners of the globe, the Palmyra Police Department did not allow them to belong to the ancient times where Facebook does not exist.

Just recently the chief of Palmyra Police Department declared that the residents will be more informed regarding the situations on the place through the introduction of their Facebook page.

The Facebook page is intended to respond to the queries and reviews of the residents as well as to the maintenance of the page content. The individuals who were tasked and responsible in responding to the residents are the three officers including the developer of the page, Det. Shawn Benedict.

The said Facebook page already had a content about the arresting that happened recently as well as to the press releases regarding the new e-ticketing system and automated license plate reader.