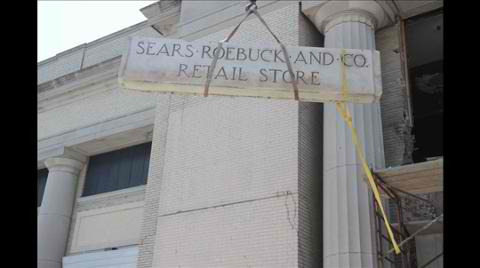 A landmark in Camden has begun its vanishing deed. Even though the Sears Building’s real demolition won’t take place until later this year as expected, the workers have started in making acts such as disappearing some of the parts of the long-vacant establishment on the Admiral Wilson Boulevard.

Last Friday, a staff used a heavy equipment to remove a 1,000-pound portion in a careful manner. The said portion used to carry the store’s former name above its main entrance for decades already. The building was constructed in 1927 and it was also the first free-standing department store by the South Jersey. It is different now because it is on its way for a redevelopment project supervised by the Campbell Soup Co. which has a headquarters near to the place.

Anthony Sanzio, a spokesman of Campbell Soup, stated last Friday that they are eliminating the front façade in reality as they find ways to honor the role of the establishment in the history of Camden.  He added that they may be eliminating portions of the building but they will still preserve those parts.

Up until now Campbell Soup is not yet sure how the said parts will be used as what Sanzio stated. He also said that there are no decisions made about the outcome of the imposing columns of the building.