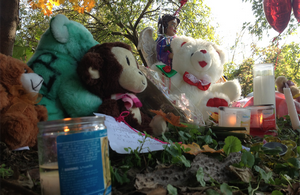 The grief of the town is very visible on a silent, sun-soaked morning in Clayton through the means of a mounting memorial of stuffed teddy bears along with balloons and flowers neighboring the area where the body of Autumn Pasquale, 12 years of age, was seen.

Justin Robinson, 15 years of age, along with his brother named Dante, 17 years of age, who are located in the residence of their mother ad stepfather in the 300 block of East Clayton Avenue were charged on Tuesday in the death of Autumn Pasquale.

At the memorial of Autumn Pasquale in East Clayton Avenue wherein stuffed bears were present that morning, one man was seen with teary eyes and he was very emotional to converse with a reporter in the area.

On the other hand, nobody responded and opened the door at house where the two siblings are believed to have murdered Autumn Pasquale.