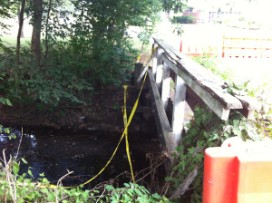 It has been approved by the officials of Cinnaminson Township last Monday about the money worth $80,000 in the emergency funding. The approval happened at the meeting of the committee for the bridge to be repaired on the Devon Road over the Pompeston Creek.

Just the past month, the wheels at the back of a truck that was loaded with trash broke through the flooring of the said bridge.

The committee already assigned and distributed the funds to be used for repairing the bridge and they had also assigned additional funds to address some emergency issues concerning the bridge repair.

When the hurricane Irene came in Cinnaminson, the reliability of the bridge was checked by the Remington and Vernick engineers and they have said that the bridge was believed architecturally safe.

The Deputy Mayor Anthony Minniti reasoned out that he does not want to say that they were positive on the bridge being damaged but he believed that the bridge was damaged matched to a time where it really needs a replacement.

The emergency funding can possible not to be asked by the township because it was believed that there were no damages found to the bridge.

On the other hand the township engineer Fred Turek detailed that the involved engineers were also testing out the Wayne Drive bridge.

Fred Turek’s thoughts about thestructure of the Devon Road was that it will be rebuild so it can be more reliable for the coming 30 or 40 years,

According to the Deputy Mayor, the work will be done internally.

The start of the construction will depend on the approval of the officials.