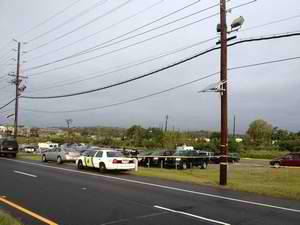 The man, whose identity is still unknown was apparently shot and got killed by an on duty police officer on Route 130 at about 12:15 in the morning at Willis Honda dealership.

The officer is reportedly on the police force of Burlington City.

It has been indicated by the original police radio call that multiple people had been shot. The officials could not attest that though. It has also been reported that an officer that was involved in the incident was brought to the area hospital because of minor injuries.

The authorities taped off a huge section of the property while the investigators are working out of the two mobile crime scene trucks windswept the scene.

A pizza shop and an auto repair garage from corner to corner of the highway is surrounded by more police tape.

The Burlington County Prosecutor’s Office along with the officials are assumed to have more information accessible by today.